Overall Summary
GW is going to produce a set of contingent rules which includes at least 5 new factions with model support.

The contingents will first appear in a White Dwarf (perhaps one or two at a time); WD will become what it used to be, models may appear around the same time. A contingent book encapsulating the new contingents and rules will be further on down the line.

This will not effect the release schedule for other armies

GW may be using this as an opportunity to clear out old stock of Kislev and Dogs of War.

A related rumor indicates the contingent paradign may be getting worked into the 40k rules as well, with GW seeing this as an opportunity to expand the scope of their game world without generating detailed armybooks for all the new things they want to include.

Contingent Rules
Contingents are aligned with Destruction, Order, or neutral similar to ally rules, there are supposed to be 2 of each in the first 6 new armies to be released.

Only 2 special/universal characters will make it into the book.
The allies rule has 3 different ways of aligning your force with another theres neutral allies, friendly and unfriendly (unfriendly represents, people forcing them to fight or they don't like each other but its for the best) there will be rules to use say (its just an example) chaos in empire.

There are significant drawbacks to this they also will be balanced for about 750 points to use by themselves, any more they lack any heavy hitters. You can align 2 or all of them together to create a rag tag army or infernal alliance (that's the exact wording), however some really hate each other and so have some drawbacks

Allied lists can be used stand alone, but there will be no lord level character
Rules for Pikes were mentions

Future Expansion
Popular contigents may get more units later on. Zoats, snakemen, and fimir are being handled by forgeworld , but ghost felt these may get their own contingent list later on as well.

Rumors on the Book
5 of the coningents will make it into book with the official allie rules and possibly some scenarios.

Fishmen/Ichthylids
Harry was shown concept art a few years back, which could have been a preview or just a continuation of the long standing studio fishmen Joke
There is a long standing joke in the studio about the next release being fishmen. However tidbits about undersea creates continue to build up in the books (lizardmen book, sea creature rules in BRB). And on models (dark elf corsairs/special character)

Insectoids
Fire Belly Shield motif on latest ogre kingdom model may be clue about insectizoid race. Insect race also mentioned in the Ogre book, possible some fluff reference to kuresh or ind somewhere as well
Hinted at not being in the forces of destruction

Non-human Contingent
something that will be in the book, not yet identified

Dogs of War/ Tilea
Ghosts said not at first, Harry heard a whisper about them, could have been something about wharfs of Gouda though. Ghost indicated Tilians will get a WD list but will not make it into the book.
Tileasn will get units for duelists, pikemen, crossbowmen, heavy cav, and a wizard with a new poison lore

Chaos Dwarves
No specific rumors other than Forgeworld being told to stop making new ones (Hasstings69, et al). This could potentially mean that they are being reserved for some sort of future GW development, or not, we'll see. 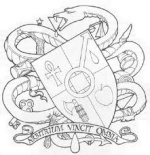